In a technological first, I am simulcasting this blog entry on the SAP Community Network and on my personal blog. The reason for this is that I am looking for some feedback on the Community Day event, and my personal blog allows people to post feedback anonymously if they wish. Anyway, on with the content… 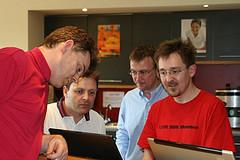 Nigel James and I organised the day as a community-driven unconference, and arranged for it to be on a Saturday, with free registration. This had a number of big advantages for us:

How the day went

The day started well, with 20 people busy talking to each other in the Axon Cafe by 10am. In fact, this networking was going so well that it was hard to interrupt everyone to get them along to the Axon Theatre for the welcome session, but once there we had a great presentation from SAP’s Ran Cliff, who gave us a sneak preview of what’s in the pipeline for the SAP Community Network. There are some very interesting initiatives being discussed at SAP which, if they become reality, will help give SCN members the opportunity to play an integral part in how SAP develop and test new products. After this welcome session, and a “message from our sponsor”, we started the two tracks of sessions for the day.

My first session was about Active Directory integration. This started off with me talking a bit about how we have integrated AD with SAP HR and SAP CUA at one of our clients, but quickly turned into a discussion of the benefits of the NetWeaver Identity Management product. Next up was a Workflow Open Forum, chaired by workflow gurus Mike Pokraka and Mark Pyc. This session was really interesting for me, as we ended up discussing the future business process platforms from SAP, including such things as BPML, BPEL, BPEL4People, XI/PI, Galaxy, Guided Procedures and good old SAP Business Workflow. I came out of the session knowing a lot more than when I went in.

With two sessions out of the way, it was time for lunch. We had catered for 40-50 people, with half that number in the room, so there was plenty to go around. More wraps & sandwiches anyone? 🙂

After lunch, Harald Reiter took us on an in-depth tour of the seldom-used PCD Filtering framework of the NetWeaver Portal, and showed us how to dynamically show Portal content based on any number of user attributes, including those coming from other systems such as HR. Then, after a coffee break to counter the growing effects of lunch, I ran a session on the Universal Worklist in a vain attempt to sell more copies of my SAP PRESS book. This would have worked much better if I had remembered to bring a copy of the book with me…

For the last session of the day, I filled an open space with a last-minute session on something I’ve been exploring in the Java technology space: Comet-based applications written using the Lift web framework for the Scala language. Scala is a object-oriented and functional language which runs on the Java Virtual Machine. It has XML as a native part of the language, which makes web services really easy to do. Lift is the web framework being developed using Scala, which gives the power of a scripting language with the type-safety and performance of a compiled language. Lift makes it easy to do Comet applications, Comet being the next step on from Ajax. Where Ajax makes changes to the page as a result of a client request and server response, Comet works from the server side only – so for example, if an administrator sends a system message, a Comet-based web application can show that message on-screen instantly, without the need for the user to do anything.

By the end of the day many people had gone home, having far to travel or having attended the sessions which interested them – and that’s fine, all part of the relaxed nature of the day. The handful of us who were left decided that going all the way into London for an event and meal was too much hard work, so we instead took advantage of the last of the sun and went to a pub in Egham to sit outside, share a few beers and put the world to rights. It was at this point that we got a call from Mark Finnern to wish us well, which was a nice end to a great day. We also decided to hold another event in 3 months time, on 16th July – the plan is to do this as an evening event held on-line as a Webinar.

Those who were not there – what could we do to persuade you to turn up to a UK community event?

For our own part, we learnt a few things: